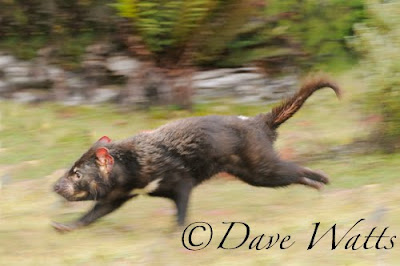 We recently spent several weeks in the wildlife treasure island of Tasmania which was our home for over 20 years. First we headed to the iconic Cradle Mountain National Park to search for some of Tassie’s unique carnivorous marsupials, Tasmanian Devils and quolls.
Unfortunately the terrier sized Tasmanian Devils are suffering from a debilitating and fatal disease called Devil Facial Tumour Disease (DFTD). This highly infectious cancer is being spread by the devil’s own biting behaviour which has decimated the wild population. 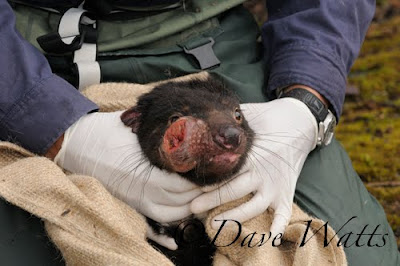 I was very fortunate to be able to spend several days with a biologist, Rodrigo Hamede and his wife Sarah, a vet, who were studying Tasmanian Devils and DFTD.

Tasmanian Devil showing serious case of DFTD.
Since 2005 an insurance population has been established at several sites on the Australian mainland. So far nearly 300 disease free devils have been trapped for this insurance population. Another option being planned is to establish disease free populations on offshore islands. Maria Island National Park off the east coast of Tasmania has been chosen for the first island translocation. To form a viable breeding nucleus around 50 devils will initially need to be released on Maria Island. 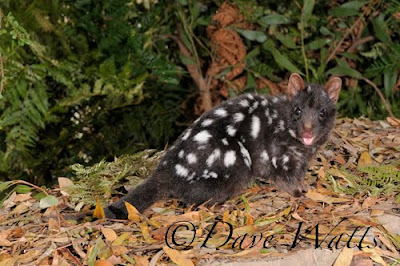 Eastern Quolls can still be seen in many of Tasmania’s glorious National Parks and occur in 2 colour morphs, a fawn morph and a black morph which appears to be increasing. These stunning little marsupial carnivores are strictly nocturnal so we needed to resort to using several Nikon flash units to obtain suitable images.

Forester Kangaroos and Common Wombats are also wonderfully photogenic and are easy to see in several National Parks in the north and east of the state such as Maria Island, Mt William and Narawntapu. The light in late afternoon, particularly during the winter months, can be superb at these sites just as the macropods are emerging to feed from their daytime shelters. 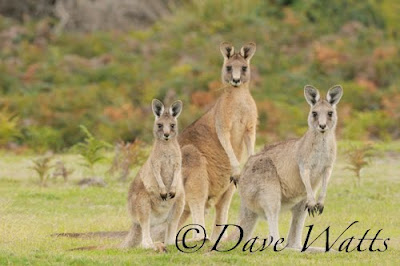 Common Wombats are tank-like marsupials which excavate large burrow systems and remain common in many parts of Tasmania. The single joey is carried in a backward facing pouch and sometimes the female can be see grazing at the front while the joey grazes at the back! Still I have yet to capture this in camera because as soon as the joey wombat hears the shutter it instantly pops back into the pouch. 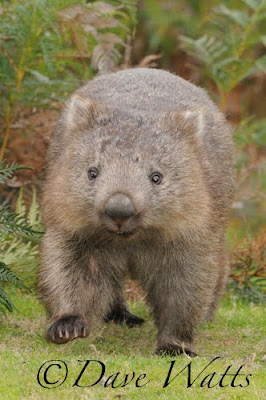 Common Wombat
Nikon D300s plus Nikkor 500mm F4 AFS lens.
ISO 100, 1/250 sec @F6.3, Tripod
Fill flash set at -1.7. Nikon SB800 speedlight
It was here in Narawntapu National Park one autumn afternoon while sitting on a small hill, that we counted 92 Common Wombats grazing. No wonder we like to refer to Narawntapu as the Serengeti of Tasmania.

For more information on the plight of the Tasmanian Devil visit -

http://www.tassiedevil.com.au/tasdevil.nsf
Posted by Dave Watts at 2:32 AM 2 comments: