Heading to the Tropics, North Queensland 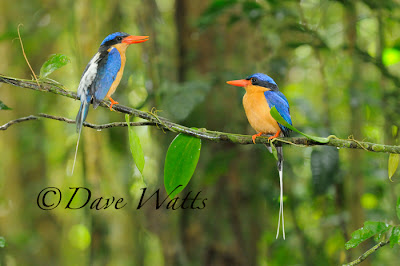 It takes several days to drive north from Melbourne to North Queensland for a distance of over 1,700 miles! Yes it is a big country.

North Queensland has much to offer the naturalist and wildlife photographer due to the incredibly rich areas of tropical rainforest which in some parts occur down to sea level. The remaining areas of rainforest are now protected by a system of World Heritage National Parks which have one of the richest variety of plant and animal life found anywhere on Earth.

For a wildlife photographer the rainforest comes with a particular set of problems. Firstly during the spring and summer it certainly knows how to rain. Combine that with extremely low light levels found under the rainforest canopy and photography of many of the unique creatures becomes quite difficult.

Where else can you find the giant Southern Cassowary, Regent Bowerbird, the stunning Buff-breasted Paradise Kingfisher, together with Lumholtz’s Tree Kangaroo and the most primitive Musky Rat Kangaroo.

We initially spent several days searching patches of rainforest for Southern Cassowaries until we saw our first, an adult male which trotted past us as it gobbled up fallen rainforest fruit. Over the next few weeks we encountered several of the giant flightless birds including a male with young stripy chicks.

Unfortunately these spectacular birds are threatened by destruction of their rainforest habitat although it is reassuring to note that they do now have many friends who are aware and committed to their plight and are working on various rainforest rehabilitation schemes.

We were extremely keen to make contact with one of North Queensland’s most beautiful birds, the Buff-breasted Paradise Kingfisher. This spectacular bird is a summer breeding visitor which doesn’t arrive at its rainforest breeding grounds until late November/December – the wet season. It was soon apparent that this season was going to be even wetter than usual.

Buff-breasted Paradise Kingfishers excavate tunnels in active termite mounds so we set up our hide overlooking a recently arrived pair with their chosen mound. The light under the rainforest canopy was dimmer than dim and it rained incessantly. It was also impossible to keep the clouds of mosquitoes out of my dome hide. I needed to set up several Nikon speedlights, each covered in a plastic bag. A vital requirement under these conditions. Once again the wireless speedlights performed flawlessly. However it was a joy to watch these oh so special birds digging out their breeding chamber and displaying over the termite mound.

North Queensland also has a huge assemblage of mammals, mainly marsupial but also many species of rats and mice. Lumholtz’s Tree Kangaroo occurs here but again it is very difficult to locate being largely nocturnal and spending most of its time in the rainforest canopy.

More than anything what is required to capture images of these cryptic creatures is time, and lots of it. We spent over 2 weeks searching for Southern Cassowaries. However at times you may get lucky as late one afternoon my wife Helen sent a radio message to say she had found a Green Ringtail Possum asleep on a low branch – with a joey in its pouch.

Heading slightly west we reached drier country and here we discovered some superb specimens of Frilled Lizard which in Queensland have a much more yellow frill compared to the redder frill of the individuals from the Northern Territory.

It was now mid December and a tropical cyclone was heading towards the coast. We needed to head south in a hurry but much of Queensland and New South Wales were covered in floodwaters. In fact the flooded area covered a region greater than western Europe. We were trapped several times by flooded roads but eventually were fortunate to make Victoria for Christmas.