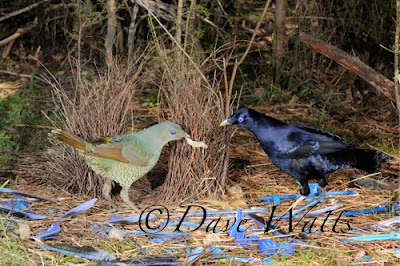 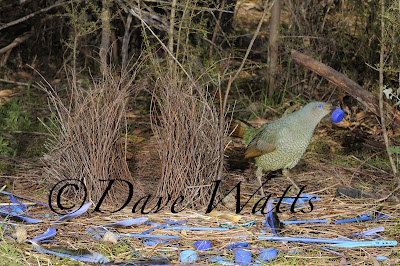 At last after several years of documenting the wildlife of Europe and other areas, I have returned to the great land down under – Australia. When I was last in Australia film was still in vogue but now I have returned with great expectations of what I can achieve with the latest in digital camera technology.

All images of Satin Bowerbirds were captured with
NIkon D300S plus 70 - 200 F2.8 AFS-VR lens.
1/320 sec @F11, 2 x Nikon Speedlights SB800 plus
SB28 triggered by Nikon SU4.
Wireless SB800 flashes triggered by cameras popup flash used
as a commander unit. Tripods plus dome hide.
I have long been fascinated with those avian builders – the bowerbirds and so was most excited when a Ranger friend showed me the active bower of a Satin Bowerbird. This particular bower was in some dry Eucalypt forest in the ACT and contained the greatest collection of blue objects I have ever seen at any such bower.
Firstly I began by introducing a camouflaged dome hide which was slowly moved closer over a period of a few days. Then 2 small tripods plus Bogen Super Clamps were erected close to the bower to support the 3 or 4 Nikon speedlights. As the bower was in shade, but with patches of harsh sunlight, it was necessary to use several flash units as the main light to fill the harsh shadows caused by the strong sunlight filtering through the canopy. 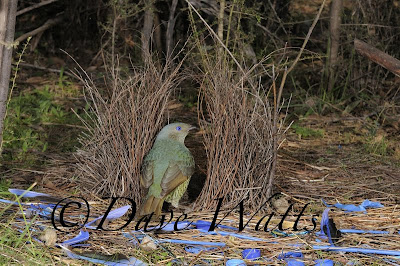 Satin Bowerbirds are among the world’s most remarkable birds and are only found in far eastern Australia. For those people unfamiliar with the antics of Satin Bowerbirds, the male constructs a bower by sticking twigs in the ground to form a double avenue. The bower is not a playground but in fact the psychological centre of the males territory. The male collects an assortment of mainly blue objects plus a few yellow ones which are displayed in front of the bower. There is a distinct correlation between the plumage colours of the male and the colours of the displayed objects, the male having an overall satin blue plumage with a yellow-tipped bill and pale yellow legs.

The adult females are a sombre olive green above with a tawny brown tail and wings. The feather margins are darker giving an overall attractive scaly appearance. One day while watching the male displaying I noticed 3 separate females had been attracted near to the bower which is where mating takes place.

In fact Satin Bowerbirds are not really difficult to photograph at the bower being quite tolerant of the close proximity of the hide and tripods. I am always excited when entering a hide for the first time and on this occasion I was not disappointed as the male began singing nearby within 30 minutes of me entering the hide.

In the past, when using film, achieving a correct exposure was problematical to say the least. Now I am able to expose a few frames and to immediately check the exposure via the histogram on the cameras rear view monitor. 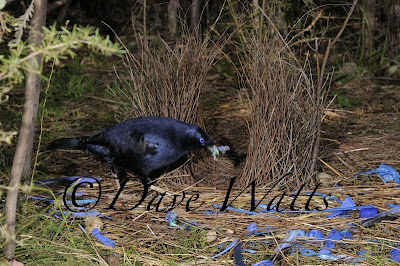 I have mounted 2 x SB 800 flash units in front of the hide. These Nikon speedlights are operated wirelessly via the pop-up flash on my Nikon D300S which is being used as a commander unit – how smart is that! A third and fourth flash units are mounted above and behind the bower. These older Nikon SB28’s are triggered by the incredibly useful Nikon SU – 4 wireless triggers which convert older non-wireless flash units into wireless TTL flash units.

From within the hide I am able to monitor and control the amount of light emitted by the flash units to achieve the aperture and lighting of the scene I require. Many thanks Nikon you have just made my work so much easier.

When viewing the results on the cameras monitor I am thrilled at the image quality of the D300S. I loved the D300 but the D300S is a distinct improvement with visibly enhanced image resolution.

There is no doubt that the latest Nikon digital cameras particularly when combined with wireless flash units have enabled me to obtain higher quality images of Australia’s unique wildlife which was so difficult or even impossible previously with film.

I will now be driving north to the wet tropics of northern Queensland hoping to photograph some of the regions rarer kangaroos and other species. 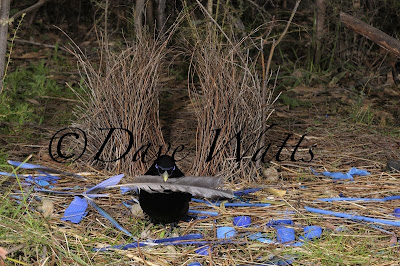