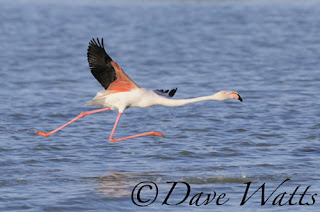 One of my all time favourite areas is “La Camargue” in southern France. This vast area of lagoons, marshes, dunes, reed beds and rice paddies is the ancient delta of the river Rhone and is one of Europe’s premier wildlife sites. Much of the area is privately owned where access is restricted, however there are extensive reserves, many with excellent public hides.

Any time of the year can be rewarding although it is not recommend that a wildlife photographer visits during July or August due to the high number of tourists and hordes of mosquitoes. 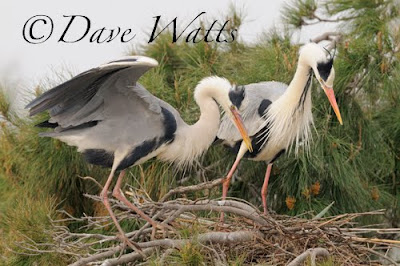 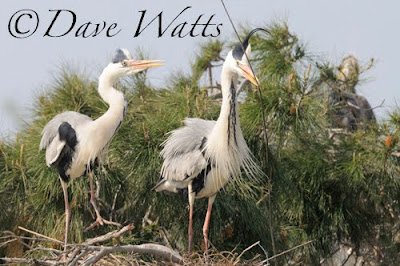 My favourite time to visit is April/May when the summer migrants are arriving and most of the breeding species are in their prime nuptial plumage. It is always such a pleasure to be driving east along the northern shore of the Etang de Vaccares, that vast coastal lagoon which is completely protected within the Camargue National Reserve. The sense of space is exhilarating and everywhere there are birds, jet black bulls and the regions famous white horses. 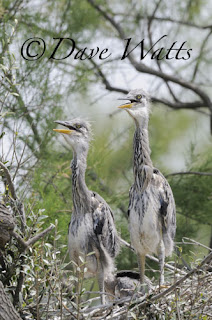 From a photography viewpoint my recent visit in early May was one of my most productive yet. Many of the regions water birds seem to have increased in recent years with that European rarity, the Great White Egret, now breeding in small numbers. Grey Herons, Little Egrets and Black-crowned Night Herons appear to me to have all increased in recent years.

One of the great attractions of the Camargue are the ubiquitous Greater Flamingos. These ridiculously shaped, gangly pink birds are so evocative of the windswept marshes, and so photogenic. The breeding colony now numbers around 10,000 pairs with 7 – 8,000 chicks being produced most years! The breeding colony is located on a custom made island in the Etang du Fangassier, a few kilometres west of Salin de Giraud.

The gravel track which passes along the north side of Fangassier and leads to the Digue à la Mer is I believe the finest site in Europe to photograph Greater Flamingos in flight. These bizarre, yet magical birds were at their best last May with long lines frequently passing to and fro between the colony and the distant feeding grounds to the north and west. 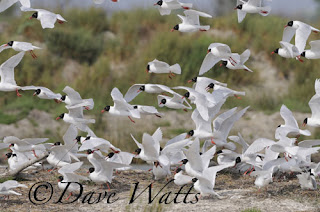 Early mornings and late evening are by far the best times to be set up with cameras and long lenses on tripods. I like to be in position about one hour before sunrise when the wide Camargue sky is suffused with a pale pink and orange glow which spreads from the east. The long lines of magical flamingos continually appear in silhouette as in a masterpiece in oil.

Mediterranean Gulls in flight at island colony. Nikon D300 plus MB-D10 plus Nikkor 500mm F4 AFS lens. ISO 400. 1/2000 sec @F7.1. Tripod mounted in a hide. No I had not disturbed the colony, they had taken flight momentarily in response to a passing Black Kite.

My D300 with its high ISO ability allowed me to capture images at 400 – 800 ISO in the low light of pre-dawn. My preferred lens is my trusty Nikkor 500mm F4 AFS lens with a 70 – 200mm F2.8 AFS VR kept handy in case of some closer flying birds. I do find the autofocus capabilities of the D300 to be quite superb once you have mastered the numerous settings.

If the infamous Mistral is blowing then the flamingos heading north fly low across the water. This powerful wind also helps to keep the myriads of mossies at bay. The long lines of outstretched birds only rise at the last moment to pass over the gravel track making for the most wonderful photo opportunities.

Without a doubt the Greater Flamingos of the Camargue are a living symbol of a conservation success story and I cannot wait to return. 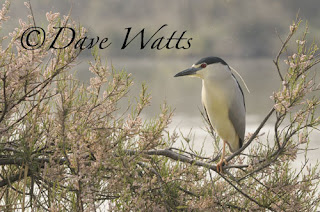